Dogs frequently perish in horror films. Of course, people die, and female characters are generally the first to expire.

In “Don’t Breathe 2,” there are precisely two ladies and two pets. Women are killed at a higher rate than dogs. Rodo Sayagues, who co-wrote both “Don’t Breathe” films with Fede lvarez, the original film’s director, creates a terrifying moral environment in this sequel.

In a variation on the house invasion genre, “Don’t Breathe,” a huge 2016 blockbuster, a blind soldier turned killing machine, Norman (Stephen Lang), faced off against three delinquents. Norman was harbouring a darker secret involving warped aspirations of fatherhood that were shattered during the theft in that film, but the robbers were ransacking his house for wealth.

Our antihero (still portrayed by Lang) has a daughter named Phoenix in the sequel (Madelyn Grace). He spends a lot of time training her in combat and survival skills, but she is seldom allowed to leave the house. Phoenix is so bored that she fantasizes about working at a children’s center. When some thugs arrive to take her, a bloodbath erupts, revealing her actual origins. 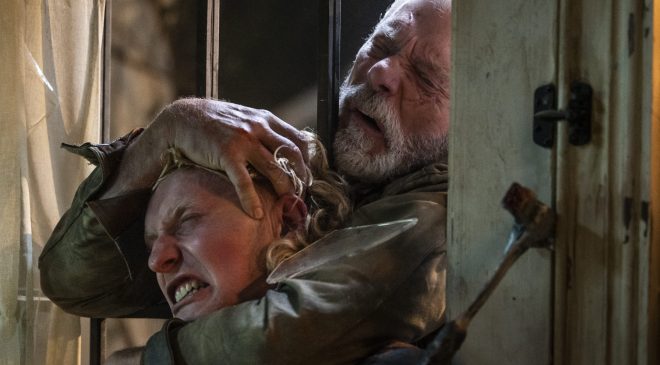 Even by horror movie standards, this film is brutal on women and girls. “Don’t Breathe 2” pits Phoenix against two vile patriarchs after murdering one of the film’s only two ladies inside the first 15 minutes. Norman also appears to be Father of the Year when compared to his competitors.

The action and violence in “Don’t Breathe 2” are high-octane, but the writing is overshadowed by a sour storyline (and some truly bad language). At the center of it all is Phoenix, who, at the early age of 11, is unnecessarily shouldering a violent man’s neuroses. At the very least, she makes it out alive.
Don’t Breathe 2 is a sequel to Don’t Breathe.

For widespread impalement and “Midsommar”-level skull-crushing, the film is rated R. 1 hour and 30 minutes of running time. In movie theatres.