Jail  – Three young individuals in a resettlement colony strive to make a life for themselves after being uprooted from their neighbourhood due to gentrification.

Vasanatabalan makes it plain from the start that Jail would be an unashamed message film about the misery of the poor who have been evicted from their homes and forced to live in a resettlement colony on the outskirts of the city. The film’s titles play over pictures of the location — in this case, Kaveri Nagar, which is a stand-in for the real-life Kannagai Nagar in Chennai — with a voice-over explaining how the entire replacement process is flawed. We get a sense of what the film will be about over the following two hours by comparing the individuals to caged animals and the location to a jail in the first few minutes.

Karna (GV Prakash Kumar), a small-time criminal, Rocky (Nandhan Ram), a drug pusher, and Kalai (Pasanga Pandi), who wishes to live a regular life after being released from juvenile jail, tell the narrative. Their neighbourhood, Kaveri Nagar, is a slum resettlement colony in the city that has developed a reputation for producing criminals since crime appears to be a more convenient way of life for some of these people than going all the way to the city for work.

It doesn’t help that the cops, lead by unscrupulous officer Perumal (Ravi Maria), are constantly slamming them with bogus charges. Rocky’s brawl with a rival gang in the neighbourhood results in death and draws his two buddies into a quagmire of violence.

Despite its noble goals, Jail is bogged down by sloppy writing that just uses cliches and doesn’t contribute anything to what we already know from the opening voice-over. The storey follows the expected rhythms — Karna’s happy-go-lucky lifestyle and relationship, Rocky’s rivalry, Kalai’s challenges to find work because of his hometown, Perumal’s evilness — but none of them emotionally connect with us as much as they should.

There are other sections that feel deliberate, as if the filmmaker is checking boxes. We get mother sympathy courtesy of Karna’s mother Paapammal (Radikaa Sarathkumar); sister sentiment courtesy of Rocky’s sister Mariapushpam (Jennifer); and, of course, friend sentiment courtesy of Rocky’s sister Mariapushpam (Jennifer). We even get a scene where the three pals get together and discuss their predicament, just in case we didn’t figure it out from the tale. It’s as though Vasantabalan doesn’t trust his audience to comprehend the circumstances in which his characters find themselves. 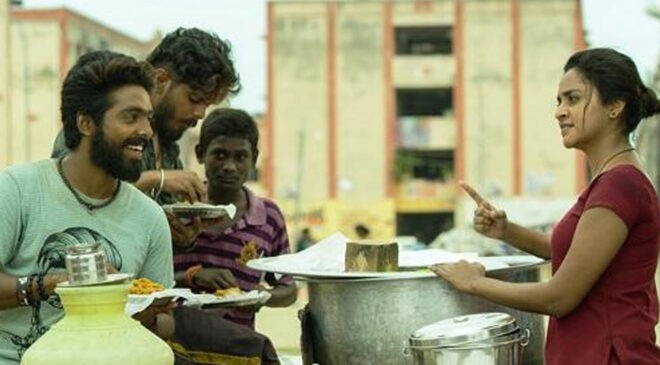 The romance tune between GV Prakash and Abarnathi, who plays Rosamalar, a feisty young girl who has sought safety in the neighbourhood, feels like a want tobe, attempting to be raw and true but failing due to its manipulated nature. The stunts, on the other hand, are choreographed by Anbariv and feel raw and authentic, as if we’re seeing a street battle. Some scenes, such as the one with Kalai, which depicts how this scenario continues to thwart even those who desire to flee it, are also well-executed.

However, the climax scenes are incredibly manufactured. They really give us the impression that the filmmaker realised his storey wasn’t going anywhere since every’message’ that needed to be delivered had already been told in the first half and rushed to the climax, giving us overly basic sequences. The climax does not elicit goosebumps, but rather a cool indifference.