Review of ‘The Green Knight’: A beautiful high fantasy fix

David Lowery’s film has an appealing visual and auditory identity that tells a timeless and timeless story.

There are numerous medieval legends of Camelot, chivalry, the Knights of the Round Table, and the search for the Holy Grail for all historians who situate King Arthur in the fifth century as the hero who unified Britain to battle the Saxon invaders. The notion of the stories answering the issues of the period would be proposed by social anthropologists.

Quests, magic, forbidden love, and strong wizards and enchantresses are timeless stories. So it is with Arthur’s nephew, Gawain, and his quest for grandeur and honor in the 14th-century epic poem “Sir Gawain and the Green Knight.” When the Green Knight arrives at Camelot on New Year’s Day and challenges the court to kill him, Gawain steps in for Arthur, with the proviso that the knight who kills him must repay the favor in a year and a day. Following numerous adventures to accomplish the quest, Gawain encounters the Green Knight after a year.

The Green Knight is a breath-taking portrayal of the narrative of a callow child who discovers himself on a journey and meets various guides along the road, including a lady without a head, a scavenger (Barry Keoghan), and a talking fox, directed, written, edited, and produced by David Lowery. The lettering of the chapters acknowledges the source material’s medieval poetic traditions, with the first one being titled “Filmic adaptation of chivalric romance by Anonymous.”
Apart from the poem’s finale and the shift of New Year’s Day to Christmas, The Green Knight follows the poem quite faithfully. 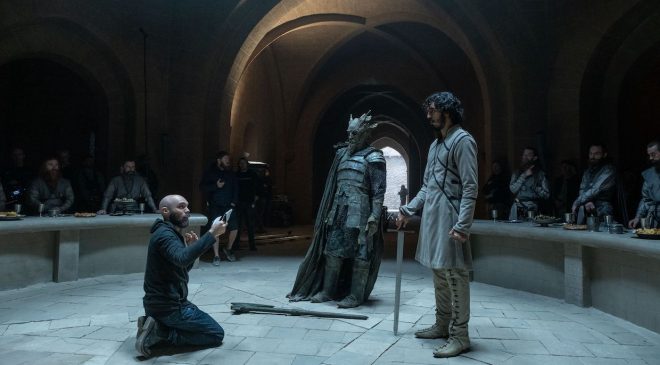 In the film, the two legendary motifs of the beheading game and the exchange of presents from the poem are shown. Gawain (Dev Patel) beheads the Green Knight (Ralph Ineson), and Lady Winifred (Erin Kellyman) is unable to rest until her head is reunited with her body. The Lord (Joel Edgerton) and Lady (Alicia Vikander) exchange presents, but none of the characters are named, implying archetypes rather than particular persons.

Despite its fidelity to the original material, The Green Knight offers a modern story, emphasizing the everlasting nature of myths and legends. At the conclusion or beginning of an endeavor, we’ve all wondered, “Is this all there is?” or, as the Lord asks Gawain, “What do you hope to gain confronting this hue?”
Lowery has demonstrated that a compelling medieval fantasy can be told without the Game of Thrones-style dragons, nuance, or gore. The images are stunning, especially the moment with the giantesses and Gawain’s wordless vision of his destiny. The outfits mix a pleasant simplicity with a wealth of meaning —

How else might the keys are sown on Guinevere’s (Kate Dickie) gown be explained?! “Red is the color of passion, but green is what lust leaves behind, in heart, in the womb,” Lady writes in her dissertation on the color green.

The cast, lead by a superb Patel, is consistently excellent. Gawain’s mother, the enchantress Morgan Le Fey, is played by Sarita Choudhury, while King Arthur is played by Sean Harris, who is a cipher due to his toothache, and Merlin is played by Emmet O’Brien.

The Green Knight has an appealing appearance and auditory characteristic that tells a timeless and timeless story. With Cursed having been canceled after just one season (sniff), The Green Knight is a fantastic way to get your high fantasy fix.

The Green Knight is presently on the big screen.